Most of us have felt the limitations of the typical grammar- or spell-check at some point. And who hasn’t stared in bewilderment at one of Word’s seemingly random squiggly lines and cried: ‘What do you want from me?’ So far, no program has received much higher praise than ‘better than nothing’ – and certainly nothing has yet replaced a well-trained human proofreader.

But can Grammarly – an application that bills itself as the ‘world’s most accurate grammar checker’ – succeed where others have fallen short?

Grammarly is aimed at ‘anyone who writes and wants to improve his or her writing ­– students, bloggers, writers, and professionals’. (It also has separate versions for secondary-school and higher-education students.) It’s more thorough than your typical checker, scanning for ‘more than 150 common and advanced grammar rules’. It also looks at punctuation and contextual spelling (such as confusion over to, too or two). It even checks for plagiarism and creates references if it considers the text has been lifted.

You have to pay a subscription for Grammarly ($19.95 for one month, $39.95 for three months, $95.45 for a year), though there are also free online services: a thesaurus, reference guide and community-driven forum. It’s also available as a plug-in for Word, although we didn’t test this feature.

There’s no auto-correct here: once you’ve copied and pasted your text in, potential mistakes are highlighted and an information box provides examples (and, pleasingly, exceptions to the rule). You then decide whether you want to change it or not. If you’re still stumped, the error cards offer a direct link to the forum, where you can post questions. It also creates a report that you can save or print off. If you’re willing to pay a bit more, you can send your document off to Grammarly’s ‘professional proofreaders [who’ll] review all issues … and correct them for you’. Mind you, if they’re doing it without your input, this sounds rather dangerous.

The error cards are certainly more comprehensive than their word processor counterparts, and generally have nice explanations of grammar terms, such as the one about appositives (nouns or noun phrases that rename the noun they sit next to), below. However, as with other programs, the ‘errors’ are sometimes misidentified –  presumably because of the challenge of programming around every rule, style choice and possible construction of English. In the example above, ‘in 2011’ is not an appositive, and does not need an extra comma. And in the example below, ‘the more likely’ is not a superlative; it’s a comparative. Removing ‘more’ would be wrong.

Of course, it’s your choice whether to make the change or not, but an unconfident user might be confused into submitting to the advice. (One bit of advice we encountered was plain wrong: no, Grammarly, final punctuation does not always go outside a bracket at the end of your sentence – not if the whole sentence is inside the brackets.)

Grammarly recognises that different documents have different levels of formality: you can scan your work in the context of various ‘paper types’, including ‘academic’, ‘business’ and ‘technical’. It’s not exactly clear what the different criteria are for each. But, for example, it let a conjunction starting a sentence go  in ‘creative’ mode, yet highlighted it in ‘general’ mode as inadvisable for formal writing. In fact, Grammarly tends towards the conservative in its rulings, also advising against contractions, such as don’t and can’t, and ending a sentence with a preposition.

It offers ‘word suggestions aimed at improving word choice and enhancing eloquence’, but, as with any thesaurus, the ‘synonyms’ are best treated with some suspicion. On Grammarly’s suggestions, the phrase ‘give your writing colour’ (taken from our blog post) was in danger of becoming ‘make your hand richness’. The program also literally objected to plain English, ‘plain’ being, apparently, too generic. 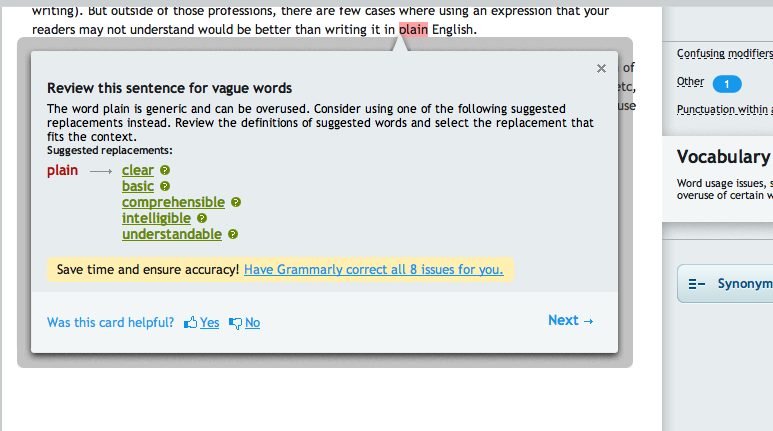 When we entered the text from our proofreading challenge the impressive-sounding ‘contextual spelling checker’ wasn’t infallible. It spotted the their that should have been a there and the unneeded space in with out. But it missed your for you’re, Id for I’d and tanks for thanks, to name but a few – as its final draft shows: 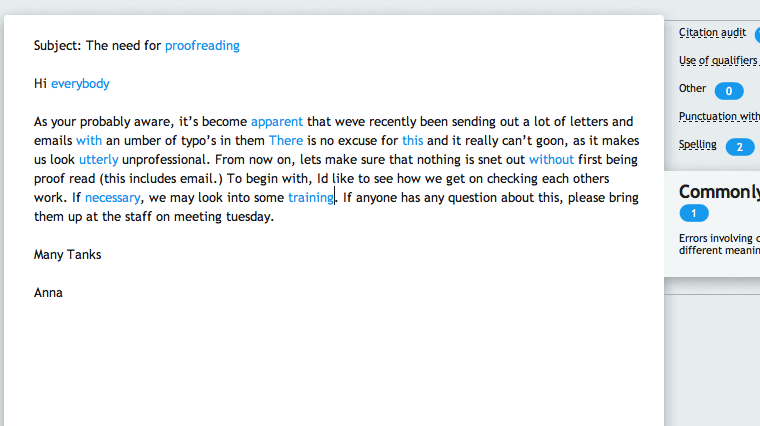 Our verdict? The fact that the program encourages active use is a plus, in that it could help users increase their knowledge of grammar. The downside of this is that it isn’t the infallible quick-fix some may be hoping for – yielding to its suggestions without questioning them won’t result in perfect documents. It also has competition from free alternatives, such as PaperRater and LanguageTool (though we’ve yet to test these).

However, Grammarly is far from a substitute for the human eye (or, better yet, several). If you decide to use it, you’ll need to have the confidence to recognise when you know better.

To learn about how we can help you, your team or your entire organisation write better documents, download our free course catalogue.