How to get what you want by changing how you write

A while ago (OK, quite a while ago), I announced that I was starting a research project on the science of written communication, with a view to writing a book on the subject.

I also said I would be posting regular updates on that research both here and on my personal blog. But since then, it’s been mainly … crickets.

OK, I have posted the odd update. But nowhere near as many as you’d expect after such a fanfare. So you’d be forgiven for thinking that, like so many such projects, this one launched with a bang and went out with a whimper, and that my blog was now serving solely as a monument in cyberspace to the folly of Shiny New Object syndrome.

Except, that’s not what’s happened in this case. The truth is that what started out as a six-month book project – to research and share the hidden neuroscience and psychology of effective writing – ended up as a six-year odyssey.

It turns out that getting to grips with subjects as diverse as psycholinguistics and neuroeconomics (the neuroscience of decision making) takes a while (who knew?). And it takes even longer if you want to be able to translate that science for people who aren’t academics or don’t have six years to spare.

The book itself is now in the works (at last). But it will also be very different from the one I set out to write. That’s because I’ve discovered not just more fascinating studies than I could ever have imagined but dramatic (sometimes shocking) stories of words failing those who wrote them – in several cases, with disastrous consequences.

Yet books take authors a while to write. And publishers take much longer to publish them. It’s still going to be quite some time before this one comes out. So why am I writing to you today?

Well, first of all, I have a brand new blog that I am now updating regularly with posts on the fascinating science I’ve discovered and practical advice on how you can use it.

But I have also been working on another project that I’m hoping will benefit you immediately. It’s a new, 5-part mini-course called Invisible Influence, all about persuasion through the written word (with the science to back it up).

Its aim is to help you not just to persuade in formal documents like proposals but to nurture productive relationships at work through email and instant messaging apps like Slack. (It will also help you avoid the tetchy exchanges most of us have by text message from time to time.)

It’s delivered by email with a built-in audio player, so you can listen to each lesson if you prefer. Oh, and it’s totally free.

Signing up is easy. Just click the button in the image below and add your email when prompted. That’s it.

I hope you enjoy it. Do write and let me know if you do. You can send a message straight to my personal email here. I’d love to hear from you. 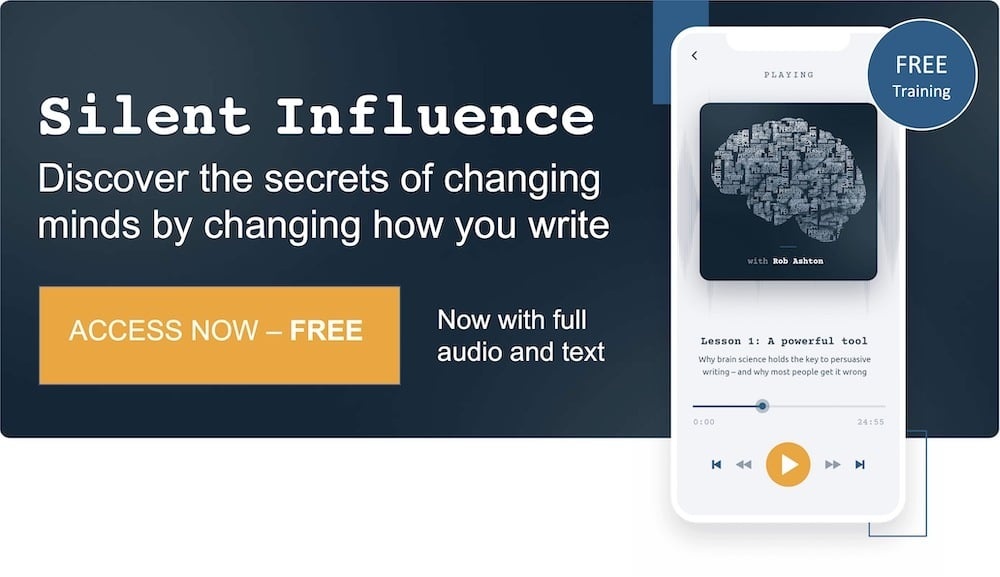 What do you want your writing style to say about you? What impression do you hope the things you write at work leave on those who read them? We know a few common answers to those questions, as we always check in on individual objectives at the start of our courses (so we can ensure […]

Of all the many conversations I had with senior lawyers in the strange summer of 2020, there is one in particular that stands out.  It was with an M&A practice head at a top 20 law firm. She’d spent months wining and dining the founders of a mid-size tech company who were planning an exit. […]